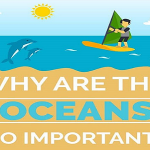 Why Are The Oceans So Important

If you are interested in environmental courses, then you will love this infographic which highlights the oceans and their importance to our lives.  Our oceans and seas cover two-thirds of the Earth’s surface. When Sir David Attenborough calls us the Blue Planet, he is accurate.  Seen from a certain distance all space dwellers can see is a ball of blue.  There is so much to know.

How Deep Is The Ocean?

The deepest section of the ocean is 1.7 miles down, known as Challenger Deep by scientists.  So far, only a handful of submersibles have been able to withstand the intense pressures here.  Located in the western Pacific Ocean at the southern end of the Mariana Trench, this is one of the most mysterious places on the planet.

The average depth is 12100 feet.  When you consider that the average open water diver can only reach between 30 and 50 feet before the pressure impacts on the functioning of the body, you can see we are ill-equipped to last too long in the ocean depths.

How Many Oceans Are There?

There should be an easy answer to this question.  However, it still depends on whom you ask.  There are three major oceans – the Pacific, the Atlantic and the Indian Oceans.  However, people have long considered the Arctic Ocean to be the fourth, and recently scientists have named the Southern Ocean, which runs closest to Antarctica.  Therefore, there are five.  If people argue there are seven, then they are separating the Atlantic and Pacific into North and South.

What Is The Difference Between Sea and Ocean?

The difference between an ocean and a sea is that the ocean is larger than the sea.  The sea is generally also the place where the ocean and land meet.  Typically, the sea will be partially enclosed by land – with the only exception being the Sargasso Sea – where the currents of the oceans dictate its flow.

How Does Plastic End Up In The Ocean?

Plastic is easily blown in the wind.  Therefore, when plastic waste is transported to landfill, it is picked up and carried in the breeze.  Some of this plastic will continue to stay on land, but some will also make its way to the sea.  Littering close to rivers and seas is another more logical reason for plastic to end up in the water.  Remember rivers drain into the sea, so even if you are a hundred miles from the coast, a lazily discarded plastic bottle at a picnic could end in the sea.  The same with products that go down the drain, which then flow into the riverways that then flow into the sea.

Are you interested to know even more about our seas and oceans? Take a look at the infographic and see why our Blue Planet is so fascinating.