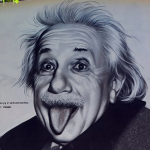 ASD or Autism Spectrum Disorder refers to a disorder that varies widely in severity from one person to another.

One person displaying signs of autism will be very much different from those displayed by another person, also with a diagnosis of ASD. However, there are some commonalities. Everyone with a diagnosis of ASD will have difficulties in three main areas: social communication, social interaction and social imagination.

With difficulties reading people’s emotions or picking up on hints such as body language, people with autism can find social situations overwhelming.  This difficulty can lead to self-isolation or to public meltdowns. Many people assume that those with autism will live lives less-ordinary and that the inability to cope with social functions; many autistic children and adults face bullying, as well as misunderstanding.

Einstein is proof that being different isn’t necessarily a bad thing. In fact, being different enabled Einstein to develop ideas and theories that are still celebrated and used today. It could be argued that his autistic mind allowed him to reach beyond the boundaries of what others thought.  So, while he is reputed to have struggled with social interactions and lacked tactile sensitivity, his intelligence and fascination with science transformed the way we think.

Easily one of the most famous composers in the world, Mozart is believed to have had repeated facial expressions; have incredibly sensitive hearing (particularly to loud sounds) and was in an unintentional constant state of motion; he just couldn’t keep still.  Imagine though if he hadn’t been so sensitive to sound. Would he have been able to bring the subtlety and depth to his compositions that we consider so timeless? Imagine if he had been able to still himself.  Would he have been so prolific?

The blonde, long-haired actress that is probably best-known for her role as a mermaid in the film Splash also has a diagnosis of ASD. Her shyness as a child was misunderstood, and even now, Daryl admits to rocking as a way of comfort when she is faced with situations she finds it difficult to comprehend. Although acting was the magical land to which she escaped, she found coping with the publicity and stardom of being a Hollywood actress almost impossible, refusing on many occasions to attend premiers of her own films. She now shuns the limelight, performing only occasional acting roles. She works happily from her home, protesting with lobby groups who work to address climate change.

Courtney was diagnosed with a mild form of autism. There is no definition of ‘mild’ autism, as such, but behaviours in her childhood and in her adult life are likely connected with autism, including being excluded from several schools.  She has a strong following, thanks to her musical career.  However, her behaviour can appear erratic and almost dangerous in some situations, traits often exhibited by children and adults with autism.

The star of Ghostbusters was diagnosed, like many so many other famous people with autism, in his childhood years. However, at the time, there was not a diagnosis mechanism for ASD; thus it wasn’t until his adult years that he received a full and frank diagnosis.  It was Dan’s wife that noticed several obsessive traits, familiar to those with ASD. On her insistence, he saw a specialist and was given the diagnosis. His two main obsessions were ghosts and policemen, which may explain the films he has worked on over the years.

Again, it was Tim Burton’s wife who spotted the signs of ASD. Married to actress Helen Bonham Carter, it was during research for a role that Helen noticed that her husband exhibited several of the traits.  As a result of the diagnosis, Tim was able to talk about the film and character of Edward Scissorhands as being semi-autobiographical. The feeling of being different and being shunned for this difference is one that never leaves those with have a diagnosis of autism.

It may be challenging to believe that someone with such a vivid imagination could be considered autistic.  A common prejudice is that people with ASD tend to logical and fixed in the perspective they hold.  Reading his diaries, however, shows that he had a tendency towards obsession.  He desired things that were often unattainable.  If you speak to those with autistic diagnosis today, they will tell you they recognise some of the themes of their lives in the story of The Ugly Duckling and The Little Mermaid.

Obviously living in a time before autism was a recognised disorder, Darwin, like Anderson, has been linked to ASD long after his death.  There were reports from his childhood that he was quiet and isolated.  He was said to be fixated on topics from the sciences.  It is likely that the high sensory input experienced by those with autism, along with an obsessive disposition, allowed Darwin the skills needed to observe nature as carefully as he did. We may never have had such a coherent theory of the survival of the fittest had it not been for Darwin’s autistic traits.

The co-founder of Microsoft and now the co-chairperson of a significant global foundation, Bill Gates should be considered nothing short of a phenomenally successful man.  Although there has no official confirmation of his diagnosis, there is a general agreement amongst those with ASD that he is on the spectrum.  The evidence they cite is his speech pattern and the way he avoids eye contact.  It is important to remember that the degree of autism can vary greatly.  It is likely that Gates technical brain and powers of concentration may also be a positive aspect of autism.

Again, as with Bill Gates, this is a matter of speculation rather than an official part of Jobs biography.  However, Jobs social skills, or lack of them, are well documented.  Equally, he had an obsessive nature, as he focused in one small details.  This led him to some unorthodox modes of thinking, which turned out to be ultimately successful.

Another man with an unorthodox mind is the artistic genius of Andy Warhol.  The lead for diagnostics in autism insists that Warhol’s love of repetition and fixation on ideas is evidence of someone on the spectrum.  Judith Gould adds that his concise answers in interviews and some quirky decisions, such as refusing to wear green underwear, can also be used to come up with a diagnosis after his death.  Why would this be important? Well, it increases awareness that autism is less of a disorder than a difference and sometimes that difference can breed genius.

At school, Yeats was bullied for his disinterest and for his somewhat awkward social behaviour.  It is interesting that the poet is known for his intense appreciation of emotion.  However, one academic points out that his obsession with Maud Gonne may have been a facet of his autism.  Also, if you pay close attention to his poems, there is an intense sensuality, which suggests he experienced the world to an extreme of his senses. Yeats biographer disagrees with academics, as Yeats emotional intelligence cannot be doubted.  However, what Yeats illustrates is that the range of characteristics of ASD makes it difficult to make generalised claims.

There is a notable lack of women on this list.  Women are more difficult to diagnose with autism, as the emotional profile of an autistic woman is different from that of a man.  Therefore, it may be that Yeats sensitivity could hide his autism, as Dickenson’s could too.  Dickenson’s way of thinking was highly unconventional for the time, she was reclusive, she preferred the simple rules that govern a child’s world, and she was fascinated by the scent of flowers.

Stanley Kubrick
Finally, on our list of famous people with autism, is movie director Stanley Kubrick. Born in 1928, autism was not given its name until the 1940s, making a diagnosis of Stanley unlikely during his childhood years.  He was, however, an iconic director, who happened to display many autistic traits. Those that worked with Kubrick noted his poor social skills, narrow, obsessive interest, and inflexibility. Yet, he is widely seen as a genius within the genre of films he directed, mainly because of his obsessive attention to detail.

The message we should take

In April, when we are recognising Autism Awareness Month, it is essential to recognise the value that people with ASD bring to our world.  To be different is often not tolerated.  However, we should show compassion and kindness to people who work at the edges of our society for they enhance our understanding of the world in so many ways.

For those working or living with those with autism, life can be difficult and inflexible, but just as rewarding. Autism awareness courses are a fabulous way of being able to expand our understanding of autism, appreciating that it is both a gift and a curse for some.