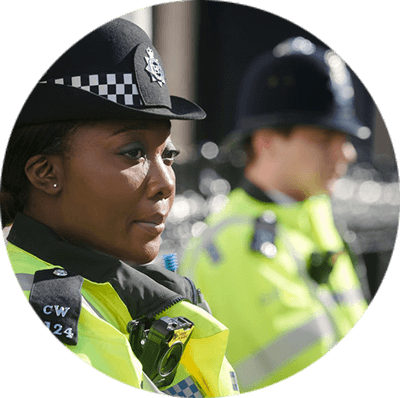 How to become a Police Officer

Courses related to this career

More 'How to become' guides

When we are children, we often play at being a police officer. One of our friends will be the criminal and our role in this make-believe is to capture them and put them in prison. This game can sometimes be a bit of push and tumble, and sometimes it is a puzzle into how the crime was committed.

With TV being awash with shows that include police officers, it is not surprising that it is an appealing career to most at some point. Even after the childhood games of cops and robbers have passed and you still want to join the police, then you may want to have a look at our online criminology courses.

Here is a guide on how to become a police officer.

What is a Police Officer?

Police officers are tasked with defending and protecting people. As part of this, they have the power to arrest and detain you if you are accused of breaking the law. It might be that they are focused on making sure drivers follow the rules of the road or respond to emergencies. Here they work to restore order and safety. They are also tasked with taking detailed reports of what happened and any action that was made.

What Are The Different Types Of Police Officer?

Policing can be split between the plain clothed detective and the day to day patrol. The force is also organised by unit and by those who are hoping to be tasked with leadership and others who will work as frontline police officers.

What Are The Working Hours Of A Police Officer?

A full-time police officer will be on duty on average for 40 hours each week. The shifts tend to be eight hours long. You will be expected to work unsociable hours, shift work and holiday periods. You may also be required to offer emergency callouts as a regular feature of your role.

How Many Police Officers Are There In The UK?

According to Full Fact, an independent fact-checking charity, there were 126,000 police officers in the UK in March 2018. This number includes the British Transport Police and those on secondment from other forces. This would be the equivalent number of full-time officers if all officers' workload were added together. Therefore, there are more people employed by the police forces than this, as some will be part-time.

What Are The Benefits Of Being A Police Officer?

You may wonder why you want to become a police officer. A lot of the websites describing the role are honest about the challenges faced by our police. However, there are lots of reasons to choose this career.

How Much Does A Police Officer Earn?

What Skills Does A Police Officer Require?

What Are The Day To Day Tasks Of A Police Officer?

Do You Need A Degree?

You can become a police officer with or without a degree. There are graduate schemes within the police that allows for more rapid movement through the ranks, as well as into specialist task forces. The Police Now Leadership programme is also available to any candidate who achieved a 2:1 or better. Police Now recruits are engaged in breaking intergenerational crime, breaking the cycle of criminal behaviour.

What Qualifications Do You Need?

The GCSEs you will need to become a police officer are similar to other professional careers. You need 5 GCSEs at Grade 4 or above. It is essential to gain qualifications in Maths, English Language and Science. It is also preferable to show strong ability in PE.

All police officers must pass an initial recruitment test, including a fitness and educational test. Some forces will ask for a Certificate in Knowledge of Policing or equivalent relevant A Levels.

How Long Does It Take To Become a Police Officer?

Successful applicants to the police force will first have to pass a fitness and medical test. The training programme can last between three weeks and three months, depending on whether you want to enter as a PCSO or continue to become a police officer.

How Do You Apply To Be A Police Officer?

The traditional route to becoming a police officer is to apply directly to a particular police force. These tend to be separated into counties across the UK. You can only apply to one force at a time. You can find vacancies for police officers on the individual websites for each of the forces.

See courses related to this career

Step By Step Guide To Becoming A Police Officer

From January 2020 the route to becoming a police officer will change. You can join on a degree apprenticeship or a standard apprenticeship. This training will take three years focused on professional policing practice.

Police officers are not allowed to join a trade union. They are expected to join the Police Federation of England and Wales. The government sets the rules and regulations for the Police Federation. The federation aims to keep members fully informed of decision-making within the force, maintain the highest level of professionalism and integrity, and act in the interest of the public.

Becoming a police officer is a highly rewarding job. You will spend your day helping people and making decisions that improve the community in which you live.

There are core competencies that are perceived as essential, which are covered in the Competency and Values Framework. These include being resolute, compassionate and committed. You are expected to be inclusive, enabling and a visionary. You will also be expected to have intelligence, creativity and to keep yourself informed. Added to this are integrity, impartiality and a commitment to public service and transparency.

If you feel you have these values and qualities, then you will find the work of the police perfect for you. You can start at the basic levels of qualification or enter as a graduate. Therefore, it is a career choice for people who are academic or want to progress through practical experience.

'How to become...' guides
How it works